[featured]
Hi ComicWhovians!
The today’s post is meant for a different reason, I want to tell about a little and extremely cute and green Teddy Bear which is becoming our mascotte!
In the recent strips we introduced a little bear that lives with the three Doctors and some readers asked us who he is (yes, he, not it 😀 ) and where he come from… The answer is simple, he is just a mistake!!! 😀
Just take a look to the following strip, the first featuring Limeykins: 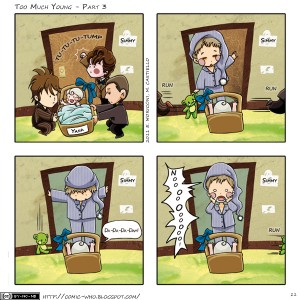 We wanted to add some cute staff to make Simmy more funny, so Elisa sorted out a green teddy bear, but in the last panel she forgot to draw it. As you can see, in the third panel Simmy left the bear that falls down, but in the forth panel it isn’t still there because the Simmy’s baloon covered all that area. When I noticed it I just said “Hey, make him run away like the others”, so you can find the little bear in the right angle running away from Simmy (or maybe from Yana, who knows).
Anyway, this simple idea makes someone laugh (well, me for example :D) and a girl from deviantArt also named the bear. And when you give a name to something, you start to love it, and now we love Limeykins!
It was a funny thing but it could end there… At that moment we had already written scripts until July (at this moment we have script scheduled until the end of October and, yes, this year Halloween falls on Monday :D), so we couldn’t simply add a new character in every strip… But mistakes are always helpful and another one leads the way to the full integration of Limeykins in our stories. Just take a look to the following strip: 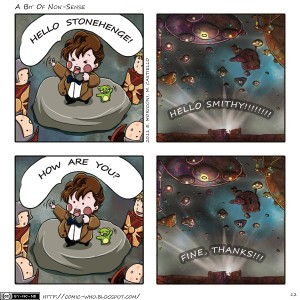 This strip was supposed to take fool of the Stonehenge speech. As you can see, the Doctor is standing on a stone, right in the middle of a stone to be more precise. This time Smithy is a bit decentralized on his stone leaving a good amount of free space on the right… and there comes the idea… we decide to fill that space with Limeykins shaking his hand like Smithy.
We received good comments and people liked the idea. For some unknown reasons, Limeykins decided to leave Simmy and went to live with the three Doctors. Adding him in every strip is quite easy… sometimes he just do a little cameo, but sometimes he also “do stuff”. For instance, in Carnival Party, when Smithy proposes to go the Simmy’s party, Limeykins is scared and in the following panel he goes away on tiptoe, just like he doesn’t love the idea to meet his old “friend” (well, I don’t think he has anything against Simmy, I think that he doesn’t have a good feeling with little Yana… but it’s just an idea, maybe we will ask him in a future Comic Who Confidential). Just a last word about the Stonehenge strip… did anybody noticed Rory? 😉

Anyway, this is how the idea cames out and I hope you like this new character. I’m quite sure that we will see more about him in the near future! Following all the strips featuring our new mascotte: 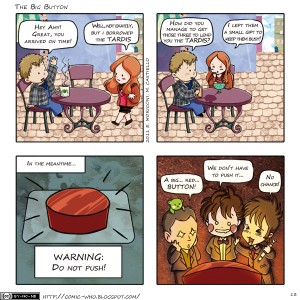 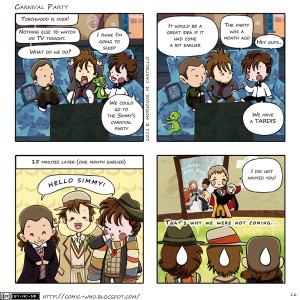 Review: Doctor Who Experience
Life on Mars versus Doctor Who
Companions/Easter Egg/Facebook/Fan/Limeykins/Special/Whovians